Readout of the President's Call with German Chancellor Merkel

US-President Barack Obama and German Chancellor Angela Merkel spoke today by telephone, one in an ongoing series of consultations between close allies on global issues. They discussed the importance of resolute action by Greece and timely support from the IMF and Europe to address Greece's economic difficulties. The President and the Chancellor also discussed ongoing efforts to support peace in the Middle East.

"I spoke with acting President Komorowski and told him that I regret that I will not be able to make it to Poland due to the volcanic ash that is disrupting air travel over Europe. Michelle and I continue to have the Polish people in our thoughts and prayers, and will support them in any way I can as they recover from this terrible tragedy. President Kaczynski was a patriot and close friend and ally of the United States, as were those who died alongside him, and the American people will never forget the lives they led."

The President's Statement on Poland | The White House

Merkel's visit included a dedication and tour of Stanford's VAIL facility, which capped her four-day trip to the United States.

Twenty years have passed since the Berlin Wall fell and Angela Merkel – then a budding politician who grew up in communist East Germany – first saw the potential and promise of a free world.

Now the chancellor of Germany, Merkel says freedom can only flourish with international cooperation aimed at making the world safer, cleaner and more economically stable.

"Freedom and solidarity and partnership belong together," Merkel told a capacity crowd at Stanford's Dinkelspiel Auditorium on Thursday after being introduced by President Emeritus Gerhard Casper. "They must be indivisible for us to be able to master the challenges ahead."

But Merkel's speech – the only one she delivered during a four-day trip to the United States – showed that those alliances often come at a cost. Speaking hours after four German troops were killed in fighting in Afghanistan, Merkel expressed her condolences while calling the war a "mission that guarantees our freedom and security."

"It is a sad experience for us in Germany," she said. "It is an experience we share with you in the United States."

With polls showing the war becoming increasingly unpopular in Germany, Merkel said she accepts and respects "doubts" about whether the conflict is necessary or right. But her commitment to fighting the war is unwavering.

'Freedom and solidarity and partnership belong together,' Chancellor Merkel told the Stanford audience.

"I stand behind this mission," she said.

Merkel's appearance at Stanford capped her visit to the United States. She was one of about 40 world leaders who were in Washington, D.C., earlier this week for a summit on nuclear security and terrorist threats.

She arrived in California on Wednesday, meeting with Gov. Arnold Schwarzenegger, Hollywood executives and actors in Los Angeles before coming to the Bay Area. She visited the Lawrence Berkeley National Laboratory and met with Silicon Valley business leaders, then headed to Stanford.

And it's on university campuses, Merkel said, where the technology needed for a better world is being created.

Citing climate change and global warming as "one of the great challenges of mankind," she called the United Nations Climate Change Conference held late last year in Copenhagen "disappointing."

Despite overwhelming evidence that the world is heating up, "we failed in drawing the right political conclusions," she said.

But she lauded Stanford researchers for their strides in creating more fuel-efficient technology. Following her speech, Merkel participated in a dedication of the building that houses Stanford's Volkswagen Automotive Innovation Lab. The lab and some of the research done there has been funded with a $5.75 million donation from VW to focus on vehicle safety, environmental improvements and autonomous driving.

Undergraduate and graduate students, faculty and VW officials walked Merkel through the new facility describing the different cars. Among them was Shelley, the autonomous Audi TTS that is gearing up for a race along the roads of Colorado's Pikes Peak later this year.

Merkel's tour culminated with her watching a demonstration of a VW Passat nicknamed "Junior," which pulled a left turn in front of her and reversed into a parking spot without any human help other than a command given with the tap of an iPhone.

She praised the partnership between Stanford and VW as an example of how big business and education can work together. And she noted that with technology and innovation come opportunities that could help shore up the world's economy.

She told the audience at Dinkelspiel that the fallout of the international financial crisis "will be with us for a long time to come." But strengthening global trade agreements, steering away from protectionism and bolstering innovation will put financial markets back on the right course, she said.

European financial woes are a volatile topic in Germany right now. The country has offered to pitch in about $11 billion for a Greek economic rescue package, a move that has sparked criticism of Merkel's government.

The bailout poses a serious political risk, as Merkel’s political party faces regional elections in Germany's biggest state on May 9. The party of Christian Democrats must win in order to maintain its majority in the Bundesrat, parliament's upper house.

Merkel did not directly address the Greek economic situation during her speech, but she did stress the need for countries to work together and share responsibility for strengthening the world's financial future.

"We need a new global financial architecture," she said. "We need rules that prevent a whole community of nations from being damaged because individuals have made mistakes."

She said the players behind the world's largest markets have to take an interest in emerging economies and "sit down and reflect together with them" how to establish a strong and prosperous global economy.

A scientist by training, Merkel earned a doctorate in physics and worked as a chemist at a scientific academy in East Berlin. While she was a student, Stanford "was just a far, far-away scientific paradise unreachable from behind the Iron Curtain." And when the Berlin Wall came down, she found herself pulled to a life of politics.

But first, she and her husband celebrated their newfound freedom by doing what they had long dreamed of. They visited California. The chancellor reminisced about the trip as she concluded her speech at Dinkelspiel, standing in front of a backdrop displaying Stanford's German motto: Die Luft der Freiheit weht.

The wind of freedom blows.

Jonathan Rabinovitz contributed to this report.

Stanford in the News

Jeffrey Pfeffer: Listen to the crowd

William Perry and George Shultz: Hot to build on the Start Treaty

Your Health in 2020: Passive patients will become empowered participants

Are You Ready For Love?

Nuclear summit is a PR smokescreen to mask US strategic objectives - Cho...

President Trump and the First Lady Participate in the 2020 Mount Rushmor... 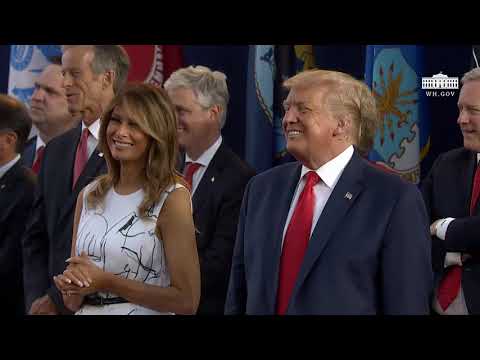